mem is the pointer which is returned to the user. 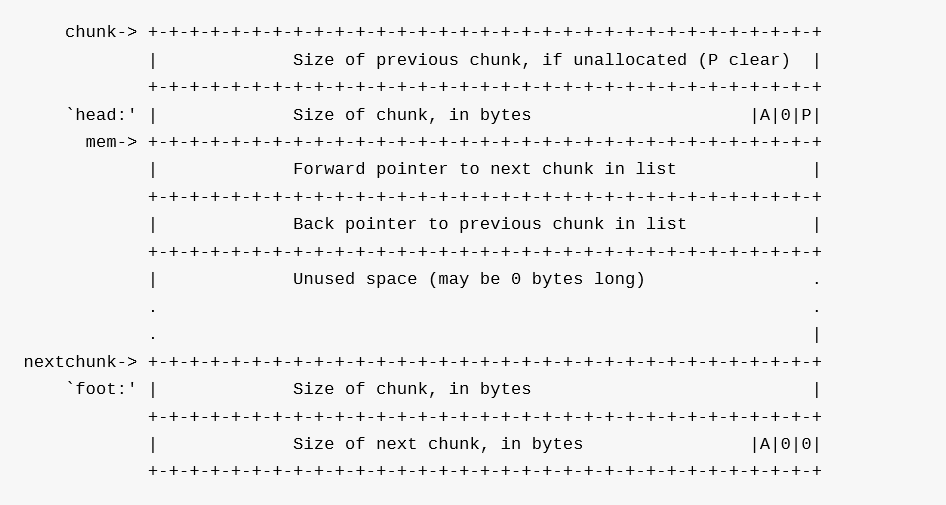 Free chunks maintain themselves in a circular doubly linked list.

PS: fastbins are not included in the set described above.

This structure represents the details of an Arena. The main threads arena is a global variable and not part of the heap segment.Arena headers( malloc_chunk structures) for other threads are themselves stored in the heap segment. Non main arena can have multiple heaps associated with them.

A bin is a list (doubly or singly linked list) of free (non-allocated) chunks. Bins are differentiated based on the size of chunks they contain:

PS: No two contiguous free fast chunks coalesce together, which is not different with normal bins.

There is only 1 unsorted bin. Small and large chunks, when freed, end up in this bin. The primary purpose of this bin is to act as a cache layer to speed up allocation and deallocation requests.

PS: While freeing, small chunks may be coalesced toghether before ending up in unsorted bins.

Each large bin maintains a doubly-linked list. A particular chunks of different sizes, sorted in decreasing order. Insertions and removal happed at any position within the list.

The first 32 bins contain chunks which are 64 bytes apart: 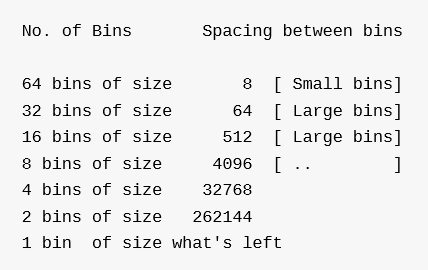 It is the chunk which borders the top of an arena. While servicing ‘malloc’ requests, it is used as the last resort. If still more size is required, it can grow using the sbrk system call. The PREV_INUSE flag is always set for the top chunk.

It is the chunk obtained from the last split. Sometimes, when exact size chunks are not available, bigger chunks are split into two. One part is returned to user whereas the other becomes the last remainder chunk.

Acquires an arena and locks the corresponding mutex.

If perturb_byte (tunable parameter for malloc using M_PERTURB) is non-zero (by default it is 0), sets the n bytes pointed to by p to be equal to perturb_byte ^ 0xff.

If perturb_byte (tunable parameter for malloc using M_PERTURB) is non-zero (by default it is 0), sets the n bytes pointed to by p to be equal to perturb_byte.

This is a defined macro which removes a chunk from a bin.

This is a specialized version of free().